The $160 million* 60MW project near Hughenden will connect to the local grid, providing electricity to communities from Julia Creek to Charters Towers, more than 500 kilometres away.  It is expected to generate enough power for more than 30,000 average homes each year.

The project includes 43.2 MW of wind, 15 MW (AC) of solar and 2 MW of battery storage and is expected to deliver lifetime emissions abatement of almost three million tonnes of CO2-e.

The CEFC has committed $94 million as a sole debt financier for the project.

The Kennedy Energy Park is part of a wave of large-scale renewable energy and storage projects in North Queensland, which include the Kidston solar and pumped hydro project, the Ross River Solar Farm, the proposed Forsayth wind farm, and the proposed Burdekin hydro project.

The addition of the battery component will provide increased grid stability, allowing local communities to benefit from cheaper, cleaner electricity closer to the point of generation, with the added benefit of relieving demand on long transmission lines. 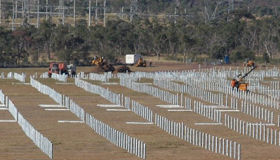