For an article published in ANZ Blue Notes, June 2015

More than 30 new renewable energy plants will begin operating across Australia within the next five years. Australia's fast-growing green bond market - and thousands of superannuants - are likely to be behind the investment that will help build this new capacity.

Analysis by the Clean Energy Finance Corporation (CEFC) shows that the Australian green bond market doubled in size in the first half of 2015.  By the end of the year, it is tipped to pass $A2 billion* in cumulative issuances, bringing with it more than 100 institutional investors. The investor appeal of this important new asset class is underscored by the fact that all Australian issuances were fully subscribed immediately after announcement - in fact, demand was so strong that the majority of issuances were healthily over-subscribed.

This reflects a broader market direction, where the investment dollar is swinging towards the cleaner end of investment options. There is now a clear signal that investors are interested in 'green' investment products, and the success of the recent green bond issuances suggests that if these products can be delivered, there will be buyers for them.

The CEFC has been active in driving the establishment of Australia's green bond market, as part of our role in helping expand and deepen the private sector clean energy investor market in Australia. 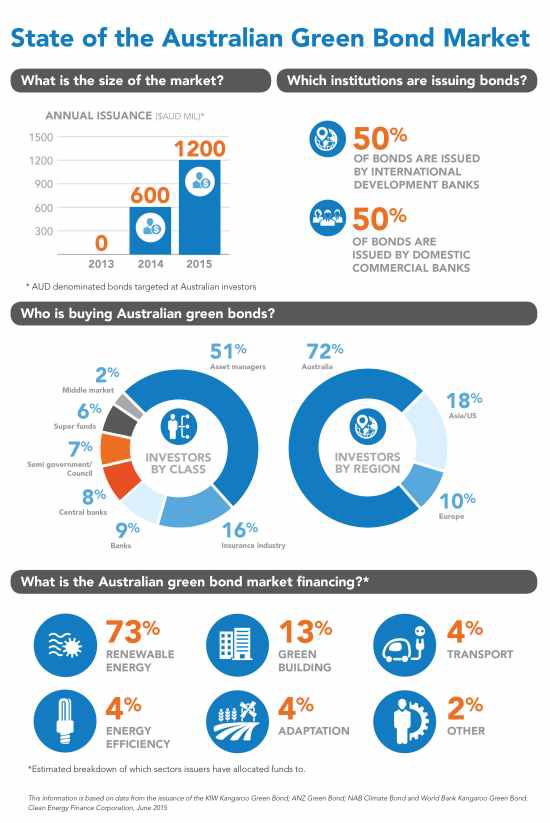 Australia catching on to the global trend

The global green bond market is one of the fastest growing markets in the world, trebling last year after issuing nearly $50 billion. It is tipped to more than double again, with estimates of over $100 billion in green bonds to be issued in 2015 alone.

To date, the biggest issuance by an Australian-based issuer has been the recent ANZ Green Bond, which closed over-subscribed at $600m. This is one of the largest green bond issuances of any commercial bank in the world for 2015.

While the Australian market has lagged behind the global green bond market, it won't for long. We see huge potential for growth in this market over the coming decade - if it continues to grow at the current trend, the market will easily surpass $3 billion in total by the end of next year.

Diversity of issuers - and investors - set to increase

As the appetite for green bonds increases we can expect to see increased diversity from both issuers and investors.

To date, the only institutions to issue green bonds targeted on the Australian market have been domestic commercial banks (50%) and international development banks (50%). However, in time, the diversity of issuers will increase. State and local governments are already showing interest in green bonds and it won't be long before they start issuing them to finance low-carbon projects. Councils have an investment function and are rightly concerned about the impact of climate change on their ratepayers. Consequently, they will want to ensure their investments are consistent with the concerns of their ratepayers.

In this context it is important to recognise that Australian dollar-denominated green bonds issued by Australian banks have been compliant with the Climate Bond Initiative Standard. Under that Standard, bonds must be independently certified to verify that the proceeds will be used in projects that meet certain criteria, developed by scientists and industry experts. This is an important way in which issuers can build investor confidence in green bonds.

From an investor point of view, we have seen interest in the Australian green bond market from both domestic and international investors.  Analysis by the CEFC suggests Australian-based investors make up over two-thirds of the investor base, with the balance from investors in Asia-Pacific/US (18%) and Europe (10%). Importantly, Australia's green bond market has already attracted interest from investors from across the economy, ranging from local councils to insurance companies.

Institutional investors are backing green bonds because they target areas viewed as increasingly important to their clients, without increasing their credit risk or lowering their returns profile. Green bonds also allow investors to balance their risk across a large number of projects, and maintain greater liquidity than possible through direct infrastructure investments.

By far the largest investor class has been asset managers, who make up over half of all investors to date. Superannuation funds are a main driver of this investment, as the majority of super funds hold green bonds through asset managers, rather than through direct investments. A growing number of super funds and their members want to invest in clean energy to take advantage of the sector's future potential. Members are increasingly pushing their super funds to adopt mandates which support clean investment, a clear indication that Australia's $2 trillion superannuation fund pool, the fourth largest in the world, will provide a significant source of demand for Australia's  emerging green bond market.

The CEFC operates like a traditional financier, working collaboratively with co-financiers and project proponents to seek ways to secure financing solutions for the clean energy sector. A key part of our role is to catalyse and leverage funding for the commercialisation and deployment of clean energy technologies. Green bonds are central to this - in fact, we see the growing Australian green bond market as a fundamental driver of new investment in the renewable sector over the next five years.

A number of renewable energy developers of large-scale wind and solar projects have been turning to the green bond market as an alternative to the traditional equity and debt markets. Over 70% of Australian green bonds will be used for renewable energy projects, ranging from solar and wind, to bioenergy, and potentially even geothermal. Already, 18 potential wind and solar projects across Victoria, South Australia, Tasmania, Western Australia, NSW and the ACT will benefit from finance raised in the Australian green bond market to date. With the 33,000 GWh Renewable Energy Target now legislated, around $10-$15 billion of investment in renewable energy will be needed over the next five years.

The growing Australian green bond market will be key to unlocking new sources of capital and expanding the investor base for this sector, which will be critical to providing the economy with the required levels of renewable energy to underpin Australia's continued economic growth.

*all dollars are Australian